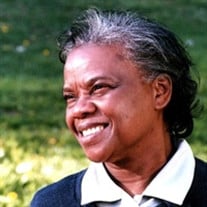 Doris LaVerne’ Burke was born on May 16, 1951, to Catherine and Samuel Clark, in Chicago, Illinois. Doris LaVerne’ attended Catholic and public schools in the city of Chicago. She graduated from Calumet High School in 1969. She was a cheerleader and in the ROTC program. Doris attended two years of college in Chicago and joined the KAPA club. In 1972, Doris met and married Larry Gene Gaskin. Doris obtained an Associate Degree of Business from the Jackson School of Business. She worked as a telephone operator for Michigan Bell until she began working for the State of Michigan Correctional facilities, where she worked for more than 25 years. She retired from the Michigan Corrections Department in January 2013. Sis. Doris came to know Jesus as her Savior through a special high school friend, Deborah Jones and her mother Eula Jones in September 1972. Sick of sin, she remembered her high school friend and called her for help. She began to worship and fellowship with the Church of God congregation on Drexel Blvd. in Chicago, Illinois, under Pastor Willie E. Gordon. After fellowshipping with the saints from other Church of God cities, she decided to relocate to the Church of God in Jackson, Michigan, under Pastor Frank Hampton, Jr. There she served as a choir member, Sunday school teacher, prison ministry organizer, altar worker, song leader, and church secretary. Sis. Doris often kept young women and children in her home to help them get on their feet. At last count, there were more than 100 lives touched through this ministry. Sis. Doris was often seen cheering and encouraging the Saints to praise the Lord with everything that they possessed! Her zeal and impelling force during any service prompted others’ motivation and inspiration. She was often heard testifying of healings, deliverance and fighting the devil. She was the epitome of a fighter. In December 2012, a friendship and interest developed with Bro. Larry Joe Burke of Columbus, Ohio. They retired on the same day and then got married the same day, July 6th, 2013. These retired lovebirds could often be seen traveling and acting like two teenagers in love. They loved to cook and entertain guests. Their home was often called the Burkes’ Bed and Breakfast. Doris was preceded in death by her father; Samuel Clark, Sr, her sister-in-law; Jamie Clark, and one granddaughter; Sh’rae Monique Hall. On December 3, 2017, the Lord called Sis. Doris home to be with her Savior. It can only be imagined that she did not get into Heaven before she started shouting to the top of her lungs and running around! Sis. Doris leaves to cherish her memories: her devoted husband; Larry Joe Burke, her beloved mother; Catherine Clark, two children; Anissa R. Gaskin, and Myron D. Gaskin (Alicia), one sister; Janet E. Copeland (Eric), and one brother; Samuel Clark, Jr., five grandchildren, two greatgrandchildren; Demyra Gaskin and Byron “Peanut” Gaskin, Jr., and a host of aunts, nieces, nephews, relatives. She also leaves a special daughter and; Shelly Lyle-Hall, a special son; Martin C. Jones (Annette), four godchildren; Chaneka Montgomery, DeJuan Murray, Yadira Jones, and Zion Worthey, special friends; Bro. and Sis. Payne, Sis. Coretta Sisson, Sis. Margaret Hampton, Sis. Ella White, Sis. Deanna Bradshaw, Sis. Rhonda Washington, Sis. Rosetta Thompson, Sis. Dorothy Thompson, the Boyer family and a host of friends and co-workers.

Doris LaVerne&#8217; Burke was born on May 16, 1951, to Catherine and Samuel Clark, in Chicago, Illinois. Doris LaVerne&#8217; attended Catholic and public schools in the city of Chicago. She graduated from Calumet High School in 1969. She was... View Obituary & Service Information

The family of Doris LaVerne' Burke created this Life Tributes page to make it easy to share your memories.

Send flowers to the Burke family.