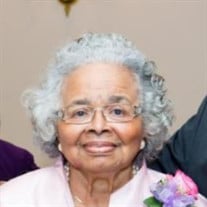 Doris was born April 25,1930 to the union of the late Mamie Lomax and Andrew Lomax. She was the youngest of two children. Doris grew up in a deeply religious home. She was especially proud of her church; Chene and Jay Church of God. She made many lifelong friendships from her involvement with Sunday school and other activities at the church. She also met her future husband Clarence Percy Broadnax at the Chene and Jay Church of God. In 1948 Doris was united in holy matrimony to Clarence. They were married until his death in 2012, for nearly 65 years. To that union three children were born, Rhea, Percy and Michelle. Although she worked full time (which was unusual in the early 1950s) She managed and supported her family well. She would cook complete meals every day, including fresh cornbread and fresh lemonade. Doris was a disciplinarian who believed in teaching morals and values to her children. She also taught about the love and fun of life. She stressed the importance of loving God and made sure we participated in Sunday School. Doris was educated in the Detroit Public school system. She was one of a few black graduates from the acclaimed Commerce High School, known for its excellent business program. She was again a pioneer, being one of the first black woman to be employed at National Bank of Detroit. This was at the dawn the Civil Rights Movement and Doris became passionate about education and social issues at work and in her community. This became the focus of her life. Her dedication and natural abilities led her into roles of leadership in all she did. She moved quickly through the ranks at NBD and retired as a supervisor. Doris loved training Co-ops for the job. She encouraged young black women and men to be proud, to have self-worth and determination and to have strong work ethics. Doris was very active in her community, starting several organizations such as Support for Black Police Officer’s Wives. She was especially proud of her volunteer work at DMC. She received many awards and recognition for her outstanding service at work and in the community. She was quiet, humble, intellectual and classy. She had a loving spirit and those who came in contact with her recognized it. The year her mother Mamie Steen and her stepfather Reverend Leonard Steen went home to glory, Doris realized it was time for her to get her life in order. She then dedicated her life to Christ. She decided to join her mother’s church; Church of God of Detroit. From that point on she was a strong, faithful, and active servant of God. Sowing her talent, time, and treasure into the vision of the church and spreading the Gospel of Jesus Christ to the outside world. She served in many capacities including President of the CWC. She especially enjoyed working with the other women in the church on special projects for the community. Doris remain steadfast in her service until her illness in 2019. Doris had multiple talents and interest. She was an avid reader of poems and literature. She loved gardening, sewing and doing home repairs. She appreciated going to the museums, enjoying all art forms. Most of all she enjoyed being with her family. Doris was a blessed woman who lived her life to the fullest. April 29th, 2022, 4 days after her 92nd birthday our heavenly father took Doris Mae Broadnax into his arms and tenderly whispered “her work was done.” Doris leaves to cherish her memory, brother Andrew (Jeri) Lomax, children Rhea (Al) Leverett, Percy (Tarilyn) Broadnax, Dr. Michelle (Thomas) Broadnax- Maybin, grandchildren; Maurice (Shawn), Cedric (Kojac), Sean, Joi, Percy Jr., Britney (Toi), DeAngelo and Michael and a host of Great grandchildren and many wonderful nieces, nephews, cousins and friends.

Doris was born April 25,1930 to the union of the late Mamie Lomax and Andrew Lomax. She was the youngest of two children. Doris grew up in a deeply religious home. She was especially proud of her church; Chene and Jay... View Obituary & Service Information

The family of Doris Mae Broadnax created this Life Tributes page to make it easy to share your memories.

Send flowers to the Broadnax family.