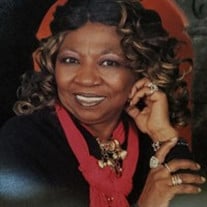 Diana Lynn Banks was born April 1, 1955, in Tutwiler, Mississippi, to Maggie Banks and Ceotias Givens. As a young child, Diana; along with her mother and siblings migrated to Jackson, Michigan, where she spent a significant amount of time with... View Obituary & Service Information

The family of Diana Lynn Banks-Joiner created this Life Tributes page to make it easy to share your memories.

Send flowers to the Banks-Joiner family.