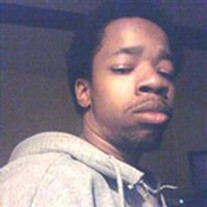 Devin Lamar Young was born in Jackson, Michigan on December 15, 1996 to Frances Darlene Young and James Edward "Micheal" Hunt. Devin Lamar Young was proceeded in death by his brother; Brazzie Young and his grandmother; Corine Young. Devin grew up here in Jackson. He attended the Jackson public schools. Devin was a team player of the Jackson Grizzlies traveling team. While playing with the Grizzlies, Devin was the shortest player on the team. He played the guard position. One of the best memories of him playing with the Grizzlies is when Devin ate nachos and fell asleep on the bench. We will miss his beautiful bright smile. He leaves to cherish his memories, his mother; Darlene Young, his father; Micheal Hunt, his sister; DeVeka Young, his brothers; Denzel Young , Terry Joyce, Jr., Patrick Banks, Jr., and Tayzon Norris along with his sisters; Majesta, Tenisa , Mykla, DeNeah, Jayla, and brothers; James, Jr., and Jymuan, his grandfather; Freddie Young, his grandmother; Ruthie Williams, several aunts and uncles; Linda and Freddie Young, Jr., Yvette and Byron Williams, and Earl Young, he also leaves a host of nieces and nephews. In addition he leaves to cherish his memories, his very best friends; David Roper, Jr. (Lil Bro), Eddie Simmions (Man Zeno) and Raequan McCranie (Quanny) Along with a very special friend; Ashley Dillery.

The family of Devin Lamar Young created this Life Tributes page to make it easy to share your memories.

Devin Lamar Young was born in Jackson, Michigan on December 15,...

Send flowers to the Young family.