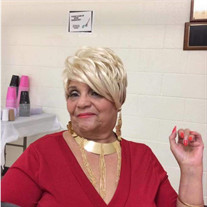 Delores Welch was born December 8, 1943 to Elbert and Olivia Murry in Dekalb, Mississippi both of whom preceded her in death. She was also preceded in death by two brothers; Lincoln Murry of Lansing, Michigan (Nickname LC) and John Murry (Raymond) of Dekalb, Mississippi, two sisters; Jenita Hudson of Chicago, Illinois and Marion Scott of Jackson, Michigan. Delores leaves two siblings out of seven to cherish her memory, Elbert Murry, Jr. and Geraldine Murry O’neal both of Chicago Illinois. Delores departed this life on August 25, 2020. She was known to many as Lois, Momma, Grandma, My Friend, and as a good person. She moved to Jackson Michigan from Omaha, Nebraska with her brother John Murry (Raymond). In her early years, she was a member of St. Mary Catholic Church. She later in life started attending World of Life under the leadership of Pastor Wayne and Beverly White and fell in love with her church family. She was employed with Cedar Knoll where she retired. She then went on to volunteer at Foote Hospital for several years. She was one who enjoyed going to the YMCA, and attending the Martin Luther King Senior Site Program under the leadership of John Willis in which she truly adored, and spoke highly of. Other times she just enjoyed talking and laughing with family and a whole host of friends. Delores leaves to cherish her four sons; Cranford Welch of Chicago, Illinois, Virgil and Mary Welch, Jr. of De Kalb, Mississippi, Ricky Welch of Anderson, Indiana, Darren Welch of De Kalb, Mississippi, also her three daughters; Linda Welch and Steve Smith of Jackson, Michigan, Mecca and Bruce Morton of Buckeye, Arizona, and last Lakisha Welch of Jackson, Michigan. She was a mother, sister, grandmother, godmother, aunt, and friend to so many. Delores leaves behind a host of grandchildren, great grandchildren, nieces and nephews, cousins, and very special friends and many more.

Delores Welch was born December 8, 1943 to Elbert and Olivia Murry in Dekalb, Mississippi both of whom preceded her in death. She was also preceded in death by two brothers; Lincoln Murry of Lansing, Michigan (Nickname LC) and John Murry (Raymond)... View Obituary & Service Information

The family of Delores Welch created this Life Tributes page to make it easy to share your memories.

Send flowers to the Welch family.