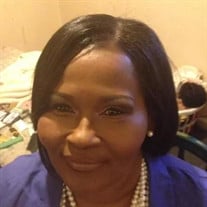 Della Louise Smith, a ffectionately k nown “Dell”, w as b orn A pril 17, 1954 i n Detroit, Michigan. Born to the union of Mr. John Cleveland Smith, Sr. and Marjorie Hatch- Smith, Dell was the second child of ten children: Edith, Arlene (Niecy), John, Jr. (Tommy Cat), Richard, Pamela, Barbara (Nino), LaDonna (Princess), Latechia and Tiffany. Her parents and four (4) siblings preceded her in death. Dell was educated in the Detroit Public Schools System. She went on to further her education with Ruth Russ Adult Education. Dell accepted Christ at an early age, at Bethlehem Tabernacle Church of God in Christ in Detroit, Michigan under the leadership of Superintendent Paul E. Hester, Sr., where she frequently assisted her mother as “her driver”, traveling to and from church conventions, family outings, and getaways. She later moved her membership with her children, to Pentecostal Life and Praise Church under the leadership of Pastor Rudolph Stanfield, Jr. Dell held many job positions, including CENA for Cambridge Nursing Home to a full time Nanny. Dell met, dated and maintained a forty plus year relationship with Calvin Chandler. Dell wanted nothing more than to be a mother. After long labor and complications, she gave birth to her oldest child/daughter, Edith Marie-Anne. Although she was grateful and felt blessed for her daughter, she longed for a SON! God blessed her with “Her Boy” Calvin Christian. The unconditional love Dell had for her children was remarkable. Dell was known to many as Moms, Grannie, Sister, Auntie and Friend. A very compassionate, yet strong willed woman, she made everyone she interacted with feel loved, appreciated and at home with her. Family was everything to Dell. Dell was a second mom to her siblings especially her sister, Nino (her baby) as well as, other family members. Dell would even steal her sibling’s grandchildren, as “Nana Dell”. Dell was described by those who knew her best as “one of a kind”, a beautiful person inside and out, with the good heart! She was a great friend and confidante, very classy, and life of the party. Exquisite food, great music, great times! Dell had zest for life. Dell loved to bowl, crochet, sew, sing, read and watch TV. Her favorite pastime was thrift store shopping with her niece/daughter, Julia (Ray-Ray). Dell’s ultimate joy was being a grandmother. What a gift she received, when her first grandchild, just so happen to be “A BOY”, her “second boy” Calvin Christian, Jr., with others to follow: JeKaylah Anise, Devin Lee, Ryan Ethan and Rolanda Marie-Anne. Dell loved and spoiled her babies! Even in her final days, her only concern was for her children and grandchildren’s well-being. In 1993, Dell became partially paralyzed from a debilitating stroke. Her strong will and determination, would not allow her to be a victim of her disability. Dell pursued every day to live a normal life, and despite health issues, she continued to live twenty-seven (27) years past her stroke. On the evening of May 3, 2021 at 8:00 pm, Dell fell asleep after a brief and sudden illness and exchanged this physical life for life eternal in the arms of Jesus. Dell leaves to cherish her memory, her daughter; Edith, her son; Calvin (Rolanda) of Detroit, Michigan, her grandchildren; Calvin, Jr., JeKaylah, Devin, Ryan, Rolanda, Riley, Donte, and Evan, companion; Calvin Chandler, her sisters; Arlene Smith-Johnson, Maxine Crawford-Clark (James), Pamela Smith, Barbara Smith, LaDonna Smith-Butler (Isaac), and Tiffany Smith-Washington (Shamarr), her aunt; Geneva Caldwell of Fort Wayne, Indiana, great-aunt; Aldonia Hood of Detroit, Michigan, her first children/niece and nephew, who always looked out for her; Julia (Ray-Ray) and Aaron (Ralph), first cousin and best friend; Carol Smith-Greene, sister-in-law and best friend; Kristine Nowlaski, her special adopted children; ReVana Stanfield, Rolanda Williams-Chandler, Laura Williams, Donte Dodson, Miranda Dodson and Ashley Dodson, her godchildren; Catherine and Mark Mills, Jr., and Courtney Friar and a host of nieces, nephews, cousins, family and friends.

The family of Della L. Smith created this Life Tributes page to make it easy to share your memories.

Send flowers to the Smith family.