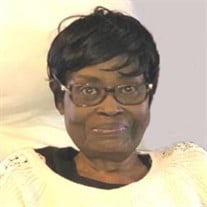 Deborah Ann (Dale) Fisher was born to the union of Gibbs A. Dale, Sr. and Mary Helen Dale on March 10, 1951 in Detroit Michigan. Deborah was the oldest of five children; Reginald and three who preceded her in death--Ramona, Gibbs Jr., and Dwayne. Deborah attended Detroit Public Schools and graduated from Cass Technical High School. After graduation from high school, she enlisted in the United States Army—the Women’s Army Corporation (WAC’S). Upon returning home, she met and married Jerrie L. Fisher. This union brought three children: Daryl and the late Calvin and Nakishia Deborah accepted Christ at an early age at Eastside Church of God under the pastorate of the late Bishop T.D. McGhee. She loved the church and served as a member of the Junior Usher Board, the Kitchen Committee, the Sacraments Committee and was a Sunday School Teacher. As Sunday School teacher, she was loved by her students who thought of her as a surrogate mom. They often shared and received counseling about things which they did not want to share with their parents. Deborah loved music so much that she became the Choir Director of the Voices of Inspiration. She was also a member of the Goodwill Musical Youth Union under Pastor Carol Hayes. Deborah loved reading, board games and was a great seamstress; but her passion was cooking. Having learned from her mom, Sister Mary Helen Dale, she was a “cook extraordinaire.” She served up many delicious meals for her family and church members on holidays throughout the year. She will be remembered most for her Macaroni & Cheese and delicious cakes. Deborah once made this statement about her cooking, “I want my food to look good, smell good and taste good.” MISSION ACCOMPLISHED! Education was important to Deborah. She went to nursing school at Wayne County Community College, received her Bachelor of Science from Spring Hill University and her Masters in Nursing from the University of Phoenix. She served as a Registered Nurse and worked for over 35 years in various health care facilities—Blue Cross, Hap and Oakwood Hospital before settling into retirement. Deborah loved her church and her family. She entered into her eternal rest on Saturday, May 9, 2020. She leaves to cherish her memory her devoted husband; Jerrie L. Fisher, son; Daryl, brother; Reginald, twelve grandchildren, two which she raised as her own—Ramona and Michelle, five great grandchildren and a host of nieces, nephews, cousins, friends and church members.

Deborah Ann (Dale) Fisher was born to the union of Gibbs A. Dale, Sr. and Mary Helen Dale on March 10, 1951 in Detroit Michigan. Deborah was the oldest of five children; Reginald and three who preceded her in death--Ramona, Gibbs Jr., and Dwayne. Deborah... View Obituary & Service Information

The family of Deborah Ann Fisher created this Life Tributes page to make it easy to share your memories.

Deborah Ann (Dale) Fisher was born to the union of Gibbs
A. Dale,...

Send flowers to the Fisher family.