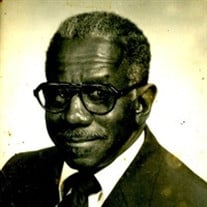 Pastor David O’Dell, Sr. was born on June 11, 1926 in Birmingham Alabama to the late Joe and Ethel O’Dell. David was born a triplet the only one to survive. David’s parents had thirteen children, Benjamin, Ethel Mae, David, Johnnie, Walter, Pearl, Robert, George, Nora, Florence, Lawrence and two that God called home early. His parents were strong-minded and strict disciplinarians. They set forth the foundation for David’s early development and Christian experience. He attended church regularly, meaning every Sunday, and front row seat. Baptized at the age of ten, at Union Baptist Church, in Birmingham, Alabama. His grandmother, Elnora Tarrant, embraced him with the nickname, "Boss." He took his nickname and ran with it. His siblings did not embrace his bossiness too kindly. He attended and completed his education at Rosedale High School in Birmingham in 1942. He first met the lovely Margaret E. Cox in May of 1947, she was his musician who accompanied him to various church engagements. She preceded him in death on September 23, 1999. They later fell in love while on the Greyhound Bus in route to a church function in Montgomery, Alabama. David’s first taste at the ministry was at the age of 24 in August of 1950. As he embraced his ministries, he was appointed to fulfill the blessings of his journey of knowledge and discovery. His first trial sermon was at the Hemwood Church of God under the leadership of the late Rev. William H. Rudledge in Birmingham. Two hearts (David and Margaret) would unify their One Love on April 7, 1951. They were married for 48 years, 5 months and 16 days. Through their love, they embraced three beautiful children, Renee, Glenda and David, Jr. He later met and married Christina Winston in 2001. She preceded him in death in September 0f 2017. David worked for various businesses, such as Sinai Hospital, Detroit Bank and Trust and Allstate Security Patrol Agency/ Lt. Officer. On January 31, 1990, he retired from Michigan Bell Telephone Company. David received his license to preach on November 6, 1971 and ordained as a gospel minister on June 7, 1975 by Rev. David Deyampert D.D. at Triumph Missionary Baptist Church. He also received various certifications from the Detroit Bible College and Anderson College. Then God called him to Pastor at the United Church of God in Toledo, Ohio on November 7, 1995. His other church affiliations were Greater Middle Missionary Baptist Church, under the leadership of the late John H. Johnson, Pastor. New Greater St. John Missionary Baptist Church under the leadership of the late Rev. B. T. Johnson, Pastor, Triumph Missionary Baptist Church, under the leadership of the late Rev. David Deyampert, D.D., Zion Church of God, under the leadership of the late Rev. Wiley N. Marshall, Pastor. Wisconsin Avenue Church of God, his duties were preaching, teaching, sick visitation, Church ordinances, teaching weekly Bible and Sunday School classes, performing holy communion and baptizing. His position was Associate Minister and Assistant Pastor. He also held office as Trustee, Treasurer and Secretary and Church usher. David was diagnosed with Dementia in June of 2014. His daughter, Glenda, became his caregiver. Thanks to my children, Keysha, Amos and Jesse and my late husband, Steven. I appreciate all his loving caregivers. It takes a team to give care for your loved ones with illness.He was preceded in death by wife Margaret E. O’Dell, daughter, Renee M. Holmes, parents, brothers, Benjamin, Johnnie, Walter, Robert, Lawrence, the two unknown, sisters, Ethel Mae Avery and Florence O’Dell, Son-In-Law’s, David Holmes and Steven Lowe. God still blessed my Dad to preach with his illness at the Community Center that he attended throughout the week. He also prayed for the other residents where he resided and said a lovely prayer for his dear and lovely friend, Sis. Lila Peeples. It’s so amazing that our God can still use someone to do his will despite what illness they embrace. God’s mercy and Grace… Hallelujah! He leaves Treasured memories with his two children, Glenda Lowe and David O’Dell, Jr., one brother; George E. O’Dell, Sr.; two sisters, Pearl Mitchell and Nora L. O’Dell, all of Flint, Michigan, eight grandchildren; Calvin, Keysha, David J. O’Dell, Chauntell Holmes, Amos Lowe, Jesse (Rachel) Lowe, Ashleigh (Brandon) Drake and Malikah O’Dell, fifteen great grandchildren; Marquitta, Jayvon, Karanji…very much appreciated. Again, we love you! Diamond, Candace, Jermaine, Jordan, Jaden, Janee, Janiya, Terrell, Imani, B.J. Jurnee and Masai, three great great grandchildren; Steven J. Lowe, III, King J. O’Dell and Kayden J. O’Dell given to us during this difficult time and a host of nieces, nephews, cousins, brother and sister-in-law’s and my loving, dear friends and all of the People I’ve met during my Journey on Earth! Greenfield Avenue Church of God and to everyone for the love and support .

Pastor David O&#8217;Dell, Sr. was born on June 11, 1926 in Birmingham Alabama to the late Joe and Ethel O&#8217;Dell. David was born a triplet the only one to survive. David&#8217;s parents had thirteen children, Benjamin, Ethel Mae, David,... View Obituary & Service Information

The family of Rev. David Odell, Sr. created this Life Tributes page to make it easy to share your memories.

Send flowers to the Sr. family.