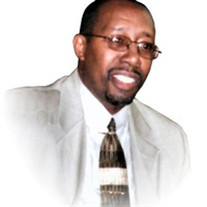 Celebration of Life Darell Marshall, Sr. was born on April 25, 1959 in Memphis, Tennessee to Evelyn Marshall and the Late Walter Lee Marshall. Darell graduated from Denby High School. He furthered his education at Grand Valley University west of Grand Rapids, Michigan. Darell was employed by the Smart Transportation System in Michigan and Dart Transportation System in Dallas, Texas. He was a dependable and dedicated worker. Darell was named “Stick” because of his slim build. He was courageous, outgoing and energetic.  Darell was wise beyond his years.  Darell was a master of words; he had a way of expressing himself that would get your full attention when he spoke.  Darell was fearless. He exemplified the definition of a “Man.” Darell met the love of his life when they were in the seventh grade. Darell was united in holy matrimony to his best friend Yolanda Stevenson on August 18, 1990.  Donald and Darell, Jr. are the offspring of this union. Darell accepted Christ as his Lord and Savior and was baptized September 6, 1996 by Pastor James Stepherson of Bethel Baptist Church East, Detroit, Michigan. Darell joined Temple of Faith Baptist Church, Detroit, Michigan under the leadership of Pastor Rochelle Davis in 200l. He was ordained as a Deacon in 2004. Darell loved the Lord and was a faithful servant. Darell relocated in Dallas, Texas in September 2006. He joined New Creation Bible Church under the leadership of Pastor Billy J. Bell where he continued to fellowship and serve. While in Detroit and Dallas, Darell enjoyed spending time with his family and friends. He loved basketball and was a true fan of the sport. He coached his son, Darell, Jr.’s Dallas, Texas Semi Pro Team in 2017. He also mentored young men who were a part of his inner circle in both Dallas, and Detroit. He was a true role model. He was a great bowler, and an excellent Ball Room Dancer.  Darell had a flair for style and fashion often finishing off an outfit with a Dobbs (Hat).  Darell Marshall made his transition from this life into everlasting life to be with the Lord on June 25, 2018. He was a devoted husband, a loving father and a special gift to all that knew him.  He leaves to cherish his memories, his loving wife; Yolanda, sons; Donald and Darell, Jr, grandchildren; Kaja, Te’a, and Laila, mother; Evelyn Marshall, brothers; Robert, Thomas, Terry and Tracy, and (Gary preceded him in death), sister; Sharon, (Thomas), Janita (Yurel), brother-in-law; Winston and sister in Laws; Denise, Wanda, Carol, and Laverne, Dorothea  and a host of aunts, uncles, cousins, nephews, nieces and friends.

The family of Darrell Marshall, Sr. created this Life Tributes page to make it easy to share your memories.

Celebration of Life Darell Marshall, Sr. was born on April 25,...

Send flowers to the Marshall, family.