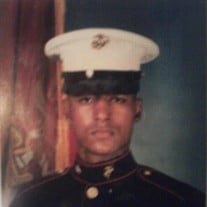 Dajuan Tyrelle Ross, 42, passed away on April 3, 2022. Dajuan was born in Albion, Michigan on July 13, 1979, the son of Johnny Ross and Lisa Davis. At the age of three his family relocated to Columbia, South Carolina where he attended elementary to high school. At the age of twelve he accepted the Lord as his personal Savior and was baptized in the Holy Spirit. Dajuan and his family later returned to their home state of Michigan, in 1997. Dajuan was enrolled in the Reserves Officers Training Corps (R.O.T.C) in Columbia, S.C. at Spring Valley High School, receiving the rank of E2-Private First Class. He later graduated from Jackson High School, Jackson, Michigan in 1998. He enlisted in the United State Marine Corps in the fall of 1998, as he worked as an Avionics Specialist. His military career carried him to various duty stations and in service of his country. Dajuan served his country with pride, honor and joy. He embraced the true meaning of “The Few, The Proud”. He volunteered during Christmas Toys for Tots while he was stationed at Dobbins, ARB. Dajuan was employed at the VA Hospital in Columbia, South Carolina and transferred later to the VA Hospital in Ann Arbor, Michigan. He also had a talent for music and was creative in producing songs he shared with friends and family. He loved family gatherings, cooking and spoiling his nieces and nephews. Dajuan was preceded in death by his maternal great grandparents; Theo and Annie Davis, paternal grandparents; Hezekiah and Dorothy Hennegan. He is survived by his parents; Lisa Davis and Johnny Ross, two sisters; Lucresha (Charles) Stone, Victorsha (Deandre) Griffin, one brother; Victor Jennings, twelve nieces and nephews; Aalayah Walker, Malachi Stone, Jeremiah Stone, SyAir Stone, Aniayja Hobbs, Deandre Griffin, Dremani Griffin, Azaylah Griffin, A’Xariya Griffin, Dre’vier Griffin, Victor Jennings, and Aurora Jennings. He also leaves many aunts, uncles, and cousins.

Dajuan Tyrelle Ross, 42, passed away on April 3, 2022. Dajuan was born in Albion, Michigan on July 13, 1979, the son of Johnny Ross and Lisa Davis. At the age of three his family relocated to Columbia, South Carolina where he attended elementary... View Obituary & Service Information

The family of Dajuan Tyrelle Ross created this Life Tributes page to make it easy to share your memories.

Send flowers to the Ross family.