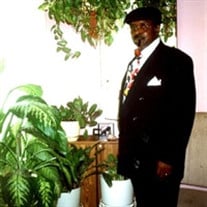 Curtis Walter Wynn, Sr .was bom on August 11,1939 to the late Grace Wynn in Borne, Georgia. His mother died when he was very young and Curtis was raised by his grandmother, Bosa Dukes. He attended Breitmeyer Elementary School, Sherrard Junior High School, and graduated from Northern High School After graduation, he served eight years in the United States Army and was honorably dischaiged ta 1963. While serving in the military he did a tour of duty in Italy. In 1964, he married Sharon E. Hatfield, his wife of 54 years. To this union three children were bom, Frederick, Curtis, Jr., and Daphna He was a devoted family man. Curtis enjoyed bowling and playing cards. He also enjoyed watching wrestling, baseball and most of all football and "Xaw and Order." He and his niece, Nicole, shared the love of reading. She supplied bim with books on a regular basis from the library. Curtis retired from Chrysler Corporation, Warren Stamping Plant in 1995, where he worked as a Metal Knisher. Always seen with his pipe, he was nick-named "^e Pipeman" by his co-workers. Curtis was baptized in the early 1950's at Eichmond Street Missionary Baptist Church (now Derrick Memorial Mismonaij Baptist Church) by its founder Bev. James O. Derrick. He was a member of the Excelsior Chorus for many years. He was an avid bible student and his knowledge of the bible was extensiva Curtis served faithfully for almost 70 years under the late Bev. J. O. Derrick, Bev. F. L. Harrison, Bev. S. E Thornton and our current pastor Lee D. Gamble. Bev. Thomton placed him on the Deacon Board as a trainee and in January, 2018 Pastor Gamble crowned Curtis and he officially became Deacon Cnrtis W. Wynn, Sr. He leaves to celebrate his having lived: his devoted wife, Sharon; children, Frederick, Curtis, Jr., and Daphne; brother, Michael; sisters, Jacqueline E and Olivia S.; grandchildren, Sharyn, Darryn, Destiny and 8 other grandchildren; 13 great-grandchildren; nieces, nephew^ numerous neighborhood children, friends and his beloved pet, CoCo.

Curtis Walter Wynn, Sr .was bom on August 11,1939 to the late Grace Wynn in Borne, Georgia. His mother died when he was very young and Curtis was raised by his grandmother, Bosa Dukes. He attended Breitmeyer Elementary School, Sherrard Junior... View Obituary & Service Information

The family of Curtis W. Wynn created this Life Tributes page to make it easy to share your memories.

Send flowers to the Wynn family.