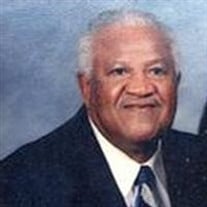 Brother Clarence Enos Leavings was born in Eunice, Louisiana to Manuel and Ethel Leavings (They preceded him in death) on February 21, 1939. He was the sixth child born to that union. He was also preceded in death by his wife Margie Ree Leavings, his sons Michael Dwayne Leavings and Melvin James Allen, his brother Frank Leavings, and sisters Edna Young and Bernadine Anderson. Clarence attended Charles Drew High School up until the 12th grade. Clarence, better known as “Enos” made his move to Detroit in 1961. Years later he found his soulmate in May of 1963. The following year, May 23, 1964 Clarence Enos leavings and Margie Ree Carlisle became one in Holy Matrimony. To this union of forty-eight years Clarence had five children; Melvin James Allen, Jr. and Charles Orlando Allen from Margie’s previous union. Later, Michael Dwayne Leavings, Stacy Vonciele Leavings and Clarence Enos Leavings, Jr. were born. Raised in a Christian home, Clarence accepted Christ at a young age. He was baptized at New Zion Baptist Church under the leadership of Rev. Joshua Frank, Sr. When he reached adulthood and moved to Detroit he attended Triumph Baptist Church. He later joined his Church home, Pine Grove Missionary Baptist Church where the Rev. Debirley Porter is Pastor. He obtained employment with McLouth Steele in Trenton, Michigan where he was a Class A Mill Wright. After 25 years of hard work he retired on disability in 1986. Clarence enjoyed several hobbies which included traveling back to his hometown, playing cards with friends, watching old western movies and his love for cars where he spent most of his days washing, detailing and checking for scratches. In his last days on this earth, his great-grandchildren played a major part of keeping a smile on his face. He loved to see them run around and talk him to death. He was a very honest man. So if you didn’t want the truth, it was best you didn’t ask. He also didn’t mind lending a helping hand wherever needed. In his community he was known as “Mr. C”, one of the coolest men you would come in contact with. On October 24, 2015, God called Clarence home to live with Him in paradise. His legacy and memories will forever be cherished by his only Daughter; Stacy, Sons; Charles Allen, and Clarence (Annette) Leavings, Grandchildren; Melvin Allen III, Myreon Allen, Chantelle Allen, Martell Allen, Azia Oden, Michael Oden, Clarence Leavings III, Chloe Leavings, Great-Grandchildren; Mashalyn, Amilya, Ariel, Myreon, Jr., Jakira, Paris, KJ., Jayce, Jade, Sisters; Gladys Blount, Dorothy Gallow, Brother-In-Law; Nolton Anderson and a host of nieces, nephews, cousins and friends as well as his best friends; James Hooks, Willie Felton, his Godson Anthony Perry and nieces Audrey Gordon, Cynthia “Ann” Doucet who made sure he didn’t miss a meal or Doctor’s appointment.

Brother Clarence Enos Leavings was born in Eunice, Louisiana to Manuel and Ethel Leavings (They preceded him in death) on February 21, 1939. He was the sixth child born to that union. He was also preceded in death by his wife Margie Ree Leavings,... View Obituary & Service Information

The family of Clarence Enos Leavings, Sr. created this Life Tributes page to make it easy to share your memories.

Send flowers to the Leavings, family.