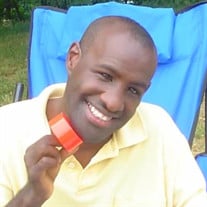 Christopher Eric Arnold moved to a new address through the gates of heaven on Sunday, February 28, 2021. He was born December 14, 1978 in Jackson, Michigan the son of Mark and Jacqueline (Jackie) Arnold. Shortly after his birth, Chris started attending Lyle A. Torrent Center and remained there until he graduated with a Certificate of Completion on May 19, 2005. Chris was a lifelong member of Second Missionary Baptist Church of Jackson, Michigan. He enjoyed music, looking at magazines, watching sports on TV, being outdoors, and family gatherings (as long as they were not at his house). We would like to thank anyone who has ever hosted Chris in their home, because by the end of his visit they would have had a thorough inspection of all the light switches and blinds in their house. Chris had a unique personality and brought a special kind of energy and presence into any room he entered. While he was unable to communicate verbally, Chris had a special way of connecting with anyone he encountered. He also had a very affectionate relationship with his nieces and nephews, who are all crazy about their Uncle Chris. Chris leaves loving parents; Mark and Jackie Arnold, two grandmothers; Robbie Griffin and Vivian Payne, three siblings; RaShwan Arnold, Angela (Kofi) Oduro, and Mark Arnold, Jr., three nephews, London Truman-Arnold, Zachary Arnold and Yaw Oduro, four nieces; Valyn (Aaron) Fraser, Taryn Arnold, Paris Truman-Arnold and Yaa Oduro, two great-nephews; London Truman and Kamari Arnold and a host of aunts, uncles, cousins and good friends to cherish his memory. On any given clear day of the year, you could find Chris standing at the end of the sidewalk enjoying the many sounds of his neighborhood. His presence will be missed by many.

Christopher Eric Arnold moved to a new address through the gates of heaven on Sunday, February 28, 2021. He was born December 14, 1978 in Jackson, Michigan the son of Mark and Jacqueline (Jackie) Arnold. Shortly after his birth, Chris started... View Obituary & Service Information

The family of Christopher Eric Arnold created this Life Tributes page to make it easy to share your memories.

Christopher Eric Arnold moved to a new address through the gates...

Send flowers to the Arnold family.