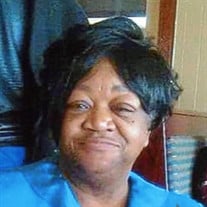 Christine Molette was born on March 29, 1950 in Byhalia, Mississippi to Ms. Ivory Marie Malone and Willie Edward Moore. She is the oldest of three daughters and one son (one daughter preceded in death, Carol). Her family called her Chris, G ma, or Big G. Christine lived in Byhalia, Mississippi until 1960 when the family relocated to Detroit, Michigan. She attended Detroit public schools and graduated from Charles Kettering High School in June 1969. By 1970 Christine move to Los Angeles, California to continue her education and in 1972 she graduated from Lincoln School of Nursing as a nurse’s assistant. Christine worked at Centinela Hospital in Ontario California. During her time in California she met Willie D. Molette in 1981. They dated until they were joined in holy matrimony on April 10, 1982 and by the winter of 1982 the couple moved back to Detroit, Michigan due to a complicated pregnancy. February of 1983 they welcomed a baby girl to the family after the baby was born she went back to work at Harper Hospital in Detroit, Michigan for over 15 years as a Telemetry technician until her retirement in 1998. Christine accepted the Lord at a young age and always served in the ministry of church. She was very dedicated to bringing souls to Christ. Her earliest work recorded was in California in 1969 under Elder Cole doing evangelism and missionary work in the Church of God in Christ. By 1982 she was a licensed Evangelistic Missionary under Dr. Maddie McGlothan. When she moved to Detroit she was under Elder Cook and the Holy Tabernacle Church of God in Christ working in Ministry until 1989 (Elder Cook’s Passing). She was then led to Greater Emmanuel institutional Church of God in Christ under Pastor J. Drew Sheard where she served as a Deaconess the Y.p.w.w president, kitchen committee, missionary, evangelist, and eventually became the district missionary I’ll be Emmanuel District until the winter of 1997 but still worked until 2007. In 2008 she attended family of faith under Reverend Harold Knox where she became a church mother and continued speaking and working for the Lord. Then in 2011 she attended greater blessed peace Church of God in Christ under pastor and Superintendent Ronald G. Alexander where she served on the mothers board, evangelist, the kitchen committee, and the president of the pastor’s aide. Christine always kept working no matter what. Her faith, strength, and determination about God’s love has always shown through to each and every person she encountered every day. On Tuesday August 18, 2020 God called his child home. She leaves to cherish her memories, her loving husband; Willie D. Molette, her daughter; Sherida Howard (Ernest Howard), one sister; Marnett Wilson Eaton (Crandell Eaton), one brother; Ricky Furlow (Wiletta Furlow), two great aunts; Roberta Hall Reed (Cleveland Reed) and Sharon Wright, one great uncle; Rev. Willie Malone (Viola Malone), four grandchildren; Jaylen, Ernest II, Stephanie, and Christopher, two nephews; three nieces, and a host of cousins ,family, friends, and The Greater Blessed Peace C.O.G.I.C.

Christine Molette was born on March 29, 1950 in Byhalia, Mississippi to Ms. Ivory Marie Malone and Willie Edward Moore. She is the oldest of three daughters and one son (one daughter preceded in death, Carol). Her family called her Chris, G... View Obituary & Service Information

The family of Christine Molette created this Life Tributes page to make it easy to share your memories.

Christine Molette was born on March 29, 1950 in Byhalia, Mississippi...

Send flowers to the Molette family.