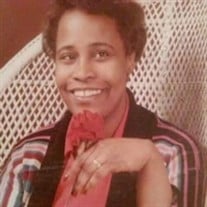 Catherine Faye Hill Thompson was born on July 16, 1944 in Charleston, Mississippi to the union of the late Alex and Ellen Lee Hill. Losing her father at the age of two years old and her mother at the age of eleven years old, Catherine was relocated to Detroit, Michigan upon her mother’s wishes, where she lived and was raised by her mother’s eldest brother Sylvester L. Whittington and Madeline L. Whittington as their very own.Catherine attended Condon Middle School and graduated from Cass Technical High School Class of 1964.Catherine accepted Christ at an early age at New Light Baptist Church under the leadership of the Late Reverend Martin Anderson and Reverend Cornell E. Talley Jr. She also worked in the church office and sang in the Allegro Choir under the direction of Harold Smith, her big brother in Christ. Her love and singing praises for the Lord didn’t stop there; Catherine was also a devout member of the Harold Smith & Majestic’s choir.In Catherine’s early years she was employed with the United States Post Office until she accepted a clerical position with the Detroit Board of Education in 1970. From 1970-2009, Catherine was employed with the Detroit Board of Education and active member of the DAEOE. In June 2009 Catherine officially retired but being as devoted and supportive as she was she volunteered yet another year of service.Catherine’s favorite color was red and she enjoyed spending time working puzzles, she was an avid reader, she loved cooking listening to gospel music, hanging out with her buddy Mama Irma, traveling to her birthplace Mississippi where she’d spend time with her cousins, dancing, and most of all spending time and doting on her children, grandchildren, and great-grandchildren whom she loved and cherished dearly.On January 19, 2018 Catherine made her final transition and received her crown of glory. Catherine is and was the matriarch of many hearts and she leaves to cherish and honor her loving memory three generations; her Children; Nannette Grier, Dominique Thompson-Sykes, Michael Thompson, Priscilla Anderson, and Isiah Anderson, her husband; Mickey Thompson, her nephew; Andre Thompson, her grandchildren; Shalece Cottrell, Bradford Cottrell, Sr., William Sykes, Sr.,Shantel Cottrell, Demetrius Sykes Sr., Isaiah Sykes, Keith Sykes, Dominique Brown, and Mychal Randol, great-grandchildren; Bradford Cottrell, Jr., Bradveon Cottrell, Santino Neely, Emery McWilliams, Alexander Neely, Makayla Lockhart Sykes,Nyla Francis,William Sykes, Jr., Demetrius Sykes Jr., De’Avery Sykes, DeA’Veah Sykes, DeMarion Sykes, Pierre D. Sykes, II, goddaughter, Myeisha Finch and a host of other cousins, nieces, nephews and other relatives and friends. Catherine was preceded in death by; Harmony Serenity 2014 Pierre D. Sykes 2014, Layla 2016,and Deirdre Cottrell.

Catherine Faye Hill Thompson was born on July 16, 1944 in Charleston, Mississippi to the union of the late Alex and Ellen Lee Hill. Losing her father at the age of two years old and her mother at the age of eleven years old, Catherine was relocated... View Obituary & Service Information

The family of Catherine Faye Thompson created this Life Tributes page to make it easy to share your memories.

Send flowers to the Thompson family.