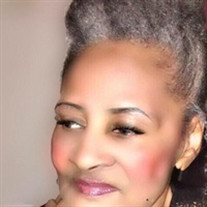 Carol Loretta Norris was born in Jackson, Michigan, on July 31, 1946, to Robert E. and Edna Mae Norris.  She departed this life at the age of 72 on Friday, November 23, 2018, in the care of Allegra Nursing and Rehab Center.  Carol (Curl as her siblings called her), was a Wonderful and Sweet Woman of God, Mother, Grandmother, Great Grandmother, Sister, Auntie, Cousin, and Friend, who had a heart for people and was very instrumental in bringing a lot of souls to Christ.  She not only took care of and ministered to her family but also to numerous people she knew and others who were strangers.  She loved reaching out to children in the hopes to help steer them on the right pathway to a better life.  Her being employed by Community Action Agency, Helmer School, Airport Road Meijer, and John Ganton Countryside Care Center afforded her the opportunity to be able to touch many lives and many people from all walks of life.  She was a True Angel right here on earth, was loved by many and will dearly be missed.        She was preceded in death by her parents; Robert E. and Edna Norris, ex-husband, Al Williams Sr., son; Keith Allen Williams, brother; Elmer Norris, sisters; Mary Ann Cawthon, Rosalee Arnold, Patricia Artis-Parker, Joan Morris       She leaves to cherish her memory three children; Al (Connie) Williams, Yvette (Robert) Powell of Jackson, Michigan and Regina (Semorris) Anderson of Indianapolis, Indiana, five grandchildren; Robert White Jr., Patrice Williams, Mario White, Johan Williams, and Ajae'sha Williams, one great grandchild; Zi'ona Williams, her sister; Kathy(Norris) James of Union, Tennessee, brothers; Kenneth Norris of Atlanta, Georgia, Gerald, and John Norris of Jackson, Michigan, many nieces, two special nieces Cynthia Little, and Laura Norris of Atlanta, Georgia, nephews, cousins, and friends.

Carol Loretta Norris was born in Jackson, Michigan, on July 31, 1946, to Robert E. and Edna Mae Norris.  She departed this life at the age of 72 on Friday, November 23, 2018, in the care of Allegra Nursing and Rehab Center.  Carol (Curl... View Obituary & Service Information

The family of Carol Loretta Norris created this Life Tributes page to make it easy to share your memories.

Send flowers to the Norris family.