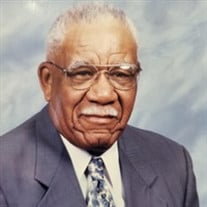 Carl Franklin Hale, age 91, died at home in Jackson, Michigan in the presence of loved ones, on Tuesday, February 12, 2019.  He was born on March 11, 1927 in Hannibal, Missouri to Verne and Bessie (Peake) Hale. Carl attended school in Hannibal, and by the time he entered high school was already known for his beautiful bass voice and musical abilities. A drummer, trumpet player and excellent dancer with a great sense of humor, Carl was popular with his classmates. Passing a storefront church and hearing the preacher rebuke his flock- reminding them about Gabriel, Carl could not resist pulling out his trumpet.  He and Margaret watched as people fled the building upon hearing the first note he blew. Carl was very fond of his three sisters, and using his sharp wit created nicknames that stuck.  His oldest sister, Doreen, with her joyful laugh and skill as a chef became “Peter”.  Dorothy Jane, with perfect posture and meticulous attire was christened “Miss Ann”, and baby sister Vernie was known as “Weasel.”  This title not only because of her reedy frame, but in acknowledgement of her ability to get out of any disaster unscathed.  And of course, his private name for his wife that lasted throughout their lives together, “Shorty.” He married Margaret Elizabeth Buckner on November 17, 1945.  Together they had three children; two boys and one girl.  In the late 50’s the family moved to St. Louis, Missouri where there were open positions in the Postal Service. In 1961 he and Margaret, who also worked for the Post Office, transferred to Jackson, Michigan. Carl spent his entire career with the Postal Service, excelling at a variety of jobs. Carl had many skills; he could do carpentry, plumbing, painting, mechanical work, and could grill a great rib.  As a choir member and Trustee of Community A.M.E. Church he was always willing to help with any task, and was known as a dependable and capable parishioner for over 30 years. In 2018 he was recognized as “Man of the Year” at Community.  He and Margaret were avid bowlers, and enjoyed traveling across the country with family to participate in tournaments.  He developed early in life a passion for reading and never lost it.  He was a regular patron at the local library until his health would no longer allow his weekly trips.    He is survived by his wife of 73 years, Margaret; children, Michael (Toni) Hale, Carl E. (Tracy) Hale, Dr. Margaret Hale-Smith, Patrick (Margarete) McElroy; 6 grandchildren; great-grandchildren, and many nieces and nephews.    In lieu of flowers, donations can be made in Carl’s honor to Community AME Church.

Carl Franklin Hale, age 91, died at home in Jackson, Michigan in the presence of loved ones, on Tuesday, February 12, 2019.  He was born on March 11, 1927 in Hannibal, Missouri to Verne and Bessie (Peake) Hale. Carl attended school in Hannibal,... View Obituary & Service Information

The family of Carl Franklin Hale created this Life Tributes page to make it easy to share your memories.

Send flowers to the Hale family.