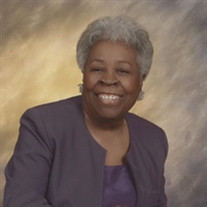 Mother Candies Hollis has reclaimed her wings and is now home enjoying the pearly streets of heaven. We can CELEBRATE knowing we have an angel smiling and watching over us! “She left this temporary place we call home on December 3, 2017 and now she is at peace!” Candies Hollis, 81, was born January 19, 1936, began her life in Osceola, Arkansas to the late Sylvester A. Harris and Mozelle Hunt (Harris). She was the third eldest of ten siblings. Her family relocated to Jackson, Michigan in the mid 1940’s. Candies was preceded in death by her parents, her daughter; Jacqueline Patterson, three sisters; Carlee Brown, Annie Pearl Osborne, and Rosalie Thornton. Candies dedicated her life to Christ and was baptized at an early age. She was a devoted and long member serving on the usher board at Bethel Baptist East, Detroit Michigan. After returning to Jackson, Michigan she joined New Macedonia Missionary Baptist Church, where she was affectionately known as Mother Hollis. There she served in complete fashion as a friend to many. Candies was united in marriage to Clifton J. Hollis January 15, 1967. Celebrating 50 years of marriage this year, however their relationship expanded over 63 years. They first met when she was 17 years old. In her younger years she worked as a nursing aide and she also received her cosmetology license. Together they owned and operated H & W Shell Service Station for many years. She also retired from Chrysler Motors after many years of service. In 2008 they decided to move to Jackson, Michigan where she was to live out the remaining of her days. She loved family gatherings, attending church, the fellowship of her friends, talking on the phone, watching a good movie and her “story” (The Young and the Restless). She  was a devoted wife, a loving mother; a granny; a confidant and a friend to many. She enjoyed laughter and could always be caught with a Big Smile on her face, even though she hardly ever wanted to take pictures. All that we knew of her will be cherished. We will always LOVE YOU!! Precious memories will live on in the hearts of her husband; Clifton J. Hollis, three grandchildren; Wanda D. Hollis of Atlanta Georgia, Sercy C. Hollis of New Orleans, Louisiana, Artemis A. Patterson of Temple, Georgia, four great-grandchildren; Brian M. Benson, Aaliyah M. Verge of Atlanta, Georgia, Keya S. Hollis, Michaela N. Hollis of Pensacola Florida, five great-great grandchildren; Nadia M. Benson, Rashard M. Benson, Ayden R. Moore, Addison D. Verge, Zariah A. Benson all of Atlanta, Georgia, three sisters; Delores Whetstone, Gwendolyn Pryor, Ruth Ann Johnson all of Jackson, Michigan, brothers; Robert Harris of Lansing, Michigan and Gerome Harris of Jackson Michigan, godson; Johnnie L. Jones of Jackson Michigan and goddaughter; Bajori Denard of Detroit Michigan, son-in-law; Artemis Patterson and a host of nieces and nephews, and other relatives and many friends.

Mother Candies Hollis has reclaimed her wings and is now home enjoying the pearly streets of heaven. We can CELEBRATE knowing we have an angel smiling and watching over us! &#8220;She left this temporary place we call home on December 3, 2017... View Obituary & Service Information

The family of Candies Hollis created this Life Tributes page to make it easy to share your memories.

Mother Candies Hollis has reclaimed her wings and is now home...

Send flowers to the Hollis family.