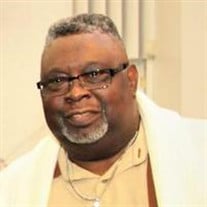 Brian D. Pope was born on July 28, 1963 to Mildred and the late Benjamin Pope. He was born and raised in Ecorse, Michigan. Brian was the oldest of four children. He was educated in the Ecorse Public School System where he attended and graduated from Ecorse High School in 1981. Brian was very athletic. He played many sports, including football, basketball and running track. His favorite was running hurdles, in which he obtained several medals, trophies and awards of achievement. He was an All-State track and field athlete. After high school, Brian attended Murray State University. Brian enlisted in the United States Coast Guard where he proudly served his country and received an Honorable Discharge in 1986. Brian accepted Christ at an early age. He was later baptized at the of age 28 at Friendship Missionary Baptist Church in Pontiac, Michigan. Brian loved the Lord and was later ordained as a deacon under the leadership of Pastor Marcus L. Johnson, Sr. of Romulus Second Baptist Church. In 2013, he later joined True Rock Church under the leadership of Pastors Darryl and Georgan Redmond. He displayed a willingness of service by immediately joining the Security Ministry where he served faithfully. In 1991, Brian met the love of his life, Sheila Watson, who would later be his life-long partner and wife. On September 5, 1992, Brian and Sheila were married. To this union, Brian accepted Adrian Watson as his step-son and later, two children were born: Breanna and Brian D. Pope II. Brian loved his family unconditionally. There is nothing that he would not do for them or anyone else. Brian was a loving husband, father, son, brother, uncle and friend to many. Brian was a hard worker. He was employed by Ford Motor Company and was grateful for the opportunity it provided. Brian never met a stranger and he had many friends. During his 20 years of dedicated service, Brian held multiple positions such as a Hi-lo driver and Repairman until his retirement in 2012. Brian enjoyed his retirement. Those that knew Brian, knew he enjoyed watching and attending sporting events, fishing, golfing and grilling outside all-year round. Brian was a people person and certainly had a way with words. On May 3, 2017 while surrounded by loved ones, Brian made his transition to be with the Lord. Brian leaves to cherish his memories; his loving and devoted wife Sheila; his mother Mildred Pope; three children, Adrian Watson, Breanna and Brian Pope II; two sisters, Tracy Pope and Tammy Ogundu (Joseph); one brother, Myron Pope (Leah); Father-in-law and Mother-in-law, Tommy and Mattie Watson; one sister in-law, Kendra Bond (Derrick); one brother in-law, Kenneth Watson; three special best friends, Joseph Fulkerson, Rev. Anthony Harris and Willie Thomas, Jr.; a host of aunts, uncles, nieces, nephews and other relatives.

Brian D. Pope was born on July 28, 1963 to Mildred and the late Benjamin Pope. He was born and raised in Ecorse, Michigan. Brian was the oldest of four children. He was educated in the Ecorse Public School System where he attended and graduated... View Obituary & Service Information

The family of Brian D. Pope created this Life Tributes page to make it easy to share your memories.

Send flowers to the Pope family.