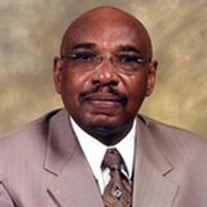 Booker Terrace Amerson was born in Bartow, Georgia to the union of Esther Taylor Amerson and Willie Lee Amerson on July 1, 1942. This was a small rural community and he grew up with his eight siblings enjoying all of the great experiences of life on the farm. Both of his parents as well as his brother LeRoy and his sister Evelyn Spann preceded him in death. Booker was a very good student and excelled in his studies at the local school. After high school graduation, he attended Albany State College and later obtained a Bachelor of Science degree in Chemistry from Savannah State University. He worked for the Federal Government in the Department of Defense at the Philadelphia Navy Yard for many years. Later, he returned to school and received a Master of Science in Computer Science from Villanova University in Philadelphia, Pennsylvania. After retiring from the Federal Government, and still being a fairly young man, he decided to devote himself to shaping a positive impression on the minds of young children, and became a teacher in the Detroit Public School System. During these years, he also inspired the establishment of a very successful janitorial company which his wife, Barbara, ran for many years. Needless to say, he was a bit of a workaholic! In the mid-sixties, on a weekend trip to Detroit, the Church of God of Detroit youth leader, Nathaniel Ligons, arranged for Booker to meet a lovely young lady, Barbara Norman. It was the first blind date for each of them, but it led to a 46-year marriage. They shared many exciting adventures with their only child, Russell Terrence Amerson (deceased). Booker was truly a “family man” and loved his family very much. He really looked forward to being with his siblings and cousins at the fabulous family reunions. Booker took special pride in the achievements of his many nieces and nephews. He was also the godfather and “grandpa” to countless children. Booker was a world traveler, enjoyed fitness and exercise, worked diligently in his yard, was an excellent cook, and also tried his hand at a little bit of golfing. Booker found Christ in his life at an early age and attended Church of God of Detroit, and later attended Trinity Faith U.M.C. He was an usher, a trustee, and a supporter of the men’s organization. His health began to fail, but he still found joy in the company of his god-daughters Duana Scott, Tonia Johnson, and Lynnette Brodie, and in his god-granddaughters Lela Brodie, Amanda Crouther, and Sha’Kayla Dorsey. Booker passed away peacefully on Monday, July 13th after a severe illness. He leaves to mourn his passing: his wife, Barbara; sisters, Charlie Mae Atkins, Ether Amerson, Betty Amerson, Sally Young, and Ellen (Edward) Ross; a brother Willie Horace Amerson as well as a host of nieces, nephews, cousins, and many warm friends and neighbors.

Booker Terrace Amerson was born in Bartow, Georgia to the union of Esther Taylor Amerson and Willie Lee Amerson on July 1, 1942. This was a small rural community and he grew up with his eight siblings enjoying all of the great experiences of... View Obituary & Service Information

The family of Booker Terrace Amerson created this Life Tributes page to make it easy to share your memories.

Booker Terrace Amerson was born in Bartow, Georgia to the union...

Send flowers to the Amerson family.