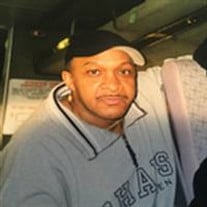 At Sunrise on November 10, 1950 in Vicksburg, Mississippi Billy Ray Sims was born to Allen and Bessie (Spicer) Sims. Billy married Marilyn Brown on September 16th 1978. To this union two children Sherrill and Toscia were born. He adopted Judy K. and Millard as his own sister and brother. On Friday November 20, 2015 the sun set and he made his transition home surrounded by his wife and family. Billy was preceded in death by his parents Allen and Bessie Sims, mother and father in law William and Jeannette Brown, grandparents, Robert and Sally Sims, Sam and Paralee Spicer, aunts, uncles, his special son Phillip D Sango and his God brother Robert Johnson. Billy joined Bethel Baptist Church and accepted Christ at an early age. He graduated from Albion Senior High School in 1970, then attended Kellogg Community College. Billy was inducted into the United States Army on November 17, 1970 where he served most of his time in Germany, and served for a total of 2 years. He was honorably discharged as a Sergeant ES. He worked several jobs before working with Ann Arbor Transportation Authority as a Motor Coach Operator. His last employment was Premier Corrugated located in Albion, Michigan. During Billy's lifetime, he was known as a leader. His mission was to always bring people together, and get the job done. He always made you feel special and important and most of all loved. He loved to laugh and talk. His wife, children, and grandchildren were his heart, and he truly enjoyed his grandchildren and great grandchildren. He loved all of his aunts and he planned monthly visits with each of them throughout the year. He loved his entire family. Love, respect, and happiness, was a known fact. Billy belonged to a Club called the Boom-Boom Room! Where he was the President of ten members. They all formed a special bond with each other that cannot be broken. He thoroughly enjoyed being the "BOSS". He loved football, his favorite team was the Michigan State Spartans. But he loved Basketball too and he was a basketball refree for the City of Albion Michigan Recreation League. He enjoyed playing Horse Shoes, and Playing Cards. The entire community of Albion, Michigan, where he grew up was his friend. Billy is survived by his wife Marilyn of 37 years, and two daughters Sherrill Caprey (LaDale) Sims and Toscia Quenti (Craig) Sims. Five grandchildren India 0. Sims, Asia M. (Reno) Dedeaux, Kenya L.V. (Frank) Williams, D'vontae T. Lewis, and Shammond D. Holmes. Nine great grandchildren Asiiah McLemore, Kadale Williams, Reno Dedeaux, Christian Dedeaux, Lundyn Williams, Taylor Lewis, Jayce Sims, Liam Scears, and Dakota Dedeaux all of Jackson, Michigan. Sisters Gloree (Millard) Coleman of Farmington Hills, Michigan, Bonnie (Ronnie) Anglin of Albion, Michigan, Sabrina (Eric) Cyrus of Lansing, Michigan, and Judy K. Harris of Jackson, Michigan. Brothers Allen (Diane) Sims of Lansing, Michigan, Louis (Etta) Sims Ypsilanti, Michigan, Ned (Rhonda) Sims of Jackson, Michigan, Carl (Becky) Sims of Lansing, Michigan, and Ronnie Sims of Albion, Michigan. God brother: Reverend Fred (Frankie) Alexander, and Terry Bonner. God sister: Paralee Bowman, and Adrianne Turnipseed. Special cousins: Leonard Walt Jones of Grand Rapids, Michigan, Dwayne Jackson of Jackson, Michigan, and Bobbie Grinston of Albion Michigan. He is survived by a host of aunts, uncles, nieces, nephews, cousins, and friends. He will be missed by all who knew him BOOM-BOOM.

The family of Billy Ray Sims created this Life Tributes page to make it easy to share your memories.

Send flowers to the Sims family.