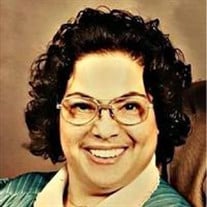 Betty Jo Buckner was born on December 13, 1932 in Shelbyville, Missouri to the late John and Pearl (Howard) Woods. She was one of fifteen children. She was united in holy matrimony to Roy H. Buckner on June 8, 1950 in Hannibal, Missouri, and was his loving and devoted wife for sixty-seven years. Two children were born to this union; Beverly Jo Buckner, who was married to Willis T. Moss Sr., whose union produced four children, and Zetta Mae (Warren,Sr.) Johnson, whose union produced two children, all currently reside in Jackson, Michigan. After relocating to Jackson, Betty was employed by the Jackson Public School District as a bus driver and driver’s aid. Betty gave her life to Christ at a very early age. She was a member of the Lily Missionary Baptist Church under the late Rev. Dr. W.G. Wade, where she served on the usher board and was President of the Kitchen Committee. Betty was known for her amazing gift of knitting afghans, other crafts, and baking. She was also an avid bowler with her family. She bowled in several leagues and attended countless State and National bowling tournaments throughout the country. One of her other favorite past times included traveling in their RV throughout the United States and Canada to different resorts, playing games, and eating at the buffets. Betty is preceded in death by her parents and eight siblings; Robert Woods, Hazel Smith, Michael Woods, John Delbert Woods, Juanita Pierson, Sharon McLoyn, Bonnie Stanton and Patricia Williams. She leaves behind to cherish her memories, her husband; Roy H. Buckner, daughters; Beverly Jo Buckner and Zetta Mae (Warren,Sr.) Johnson, five sisters; Ida Harris and Mildred Buckner, both of Jackson, Michigan, Barbara (Pastor Kirkland) Hall of Lansing, Michigan, Linda Williams of Oklahoma, and Lois (Lloyd) Holland, six grandchildren; Willis (Nicole) Moss, Roy (Julie) Moss, Maureen Worthey, Karin Lynette Moss, Shareena (Keigel,Sr.) Johnson and Warren (Mia) Johnson, Jr. all of Jackson, Michigan, twenty-five great-grandchildren and sixteen great-great grandchildren.

Betty Jo Buckner was born on December 13, 1932 in Shelbyville, Missouri to the late John and Pearl (Howard) Woods. She was one of fifteen children. She was united in holy matrimony to Roy H. Buckner on June 8, 1950 in Hannibal, Missouri, and... View Obituary & Service Information

The family of Betty Jo Buckner created this Life Tributes page to make it easy to share your memories.

Send flowers to the Buckner family.