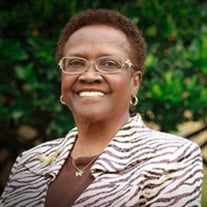 Phase One &#8211; Origins Rita Joyce Johnson was born on February 22, 1942 in Birmingham, Alabama to Lillie Thelma Williams. She was the oldest of six siblings. The year after Rita was born her family moved to Detroit, Michigan where she was... View Obituary & Service Information

The family of Apostle Rita Joyce Johnson created this Life Tributes page to make it easy to share your memories.