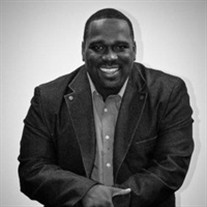 ANTONIO DELRAY MCDUFFY aka “Tony” was born July 10th 1969 in Detroit MI to Deborah Bishop and James Lindsey. He was the first born of five siblings. His father James passed away December 12, 1972. His mother met the love of her life in 1973 who she then married in 1975. Gregory Sr. became a loving and nurturing father in Tony’s life from then on. Antonio expressed a deep love for the Lord from an early age. He was nurtured in the Lord while attending Sacred Portals with his family until his early 20’s. Antonio received his education at  Strathmore Elementary, Cerveny Middle School, and Cooley High School, where he participated in the Gospel Choir, Vocal Ensemble, and Male Chorus. He took great pride in singing at his high school graduation as well as ministering for Marvin Winans. He pursued post-secondary studies at William Tyndale Christian College and Spring Arbor University.   Antonio met the love of his life Winifred McDuffy (Wendy) in 1992 at church, of course. They began dating and later married in 1995. Antonio loved Winifred and made sure she was always well taken care of. They both had hearts of gold and were always found giving and serving. In March of 1996 they gave birth to their first child Me’Chelle and completed the family in 2002 with their baby girl Mikayla. Antonio loved his family, He always took pride in treating his ladies with the utmost respect. He cherished his relationships with his daughters and made sure they knew it , with daddy daughter dates, and being a support to them in whatever they did. In September 1994 Tony became an Elder under Bishop John L. Jones. He then attended New Creation Deliverance Ministries (Apostle Clyde and Dr. Beth Howard). In 1999 he became a Praise &  Worship leader and an Elder of the Church.In 2002 he became a Youth Pastor which eventually led to him becoming an assistant pastor at Kingdom Creation Power and Praise Ministries. In 2007 Antonio felt a call from God to step out on faith and start his own church-based  ministry. The manifestation of this call of God is Elshaddi Ministries which later became Elshaddi Community Outreach. Pastor McDuffy pastored the Elshaddai congregation faithfully until his final days. Antonio was never a stranger to the workforce. He worked in various fields from the funeral home to a pharmacy, and even a bank. He finally accepted his calling when he started youth ministry. Antonio began his career at Central Detroit Christian CDC twenty- five years ago. He served as  the Children’s Director for twenty of those years, where he ran the Breakthrough Enrichment program, various after school partnership programs, Summer Day Camp, Overnight camp, and a multitude of programs that met the needs of children. Antonio was fearless in meeting new people and grew programs to large numbers with very little effort. There was not a challenge that he did not conquer. He had a passion for home visitation and relished the opportunity to meet parents and the whole family. He spent many hours a week with his community and was often compelled to open his own doors for the opportunity for children who were in need. Tony had two passions in life: helping people come to know Jesus and helping people find their hope. He was instrumental in establishing the CDC Christmas store which gave parents the ability to give their children gifts for Christmas. Through this initiative over the past 18 years, the Christmas store has provided over 9,000 gifts to Children. Tony, was determined that no child or family should be without food and was passionate about cooking and feeding people.Tony and his wife, Wendy, cooked meals for the programs so that kids of the community had something nutritious to eat. Later, he spearheaded CDC’s partnership with Gleaners Food Bank and Forgotten Harvest. Through his vision, CDC grew to provide 35,000 meals, a year for families in need. While impressive, Tony had no greater passion than to help someone come to know Jesus. He shared the good news everywhere he went, especially in every children’s programming.  We estimate that Tony reached over 10,000 people through his ministry at CDC, and many became followers of Jesus because of Tony’s faithfulness and obedience to share the gospel. In the last five years of Tony’s ministry, he directed CDC employment initiatives with adults and teens and worked hard at helping anyone get a job. For three summers he spearheaded the Grow Detroit’s Young Talent program overseeing 200+ teens summer in their employment training and placement. We could go on and on about his ministry to the community through CDC, but there is not enough room. Tony was a larger than life personality who loved people hard, and loved God even harder. He remembered more birthdays, attended more graduations, weddings and funerals than we thought humanly possible. He was there for everyone and was a prayer warrior like no other. He was there in prayer and in person. Those welcoming his loving spirit into assurance of his eternal rest are: His mother Deborah Bishop, his father James Lindsey, his great grandmother's Emma Dabney and Ossie Bell. His grandmothers Dorthy Lewis and Lillie Mae Brown. His grandfather Authur Bishop,  his great great grandmother Ann Berry, his two uncles Lamar Williams and Walter Jackson, his great uncle Charlie Berry, his great aunt Dothry Berry, his cousin Marcus Riley and Kim Tillman, his goddaughter Ineisha Howard and his godson Carlton Davis.   Tony leaves to cherish his precious memories his father Gregory L. Bishop Sr. His loving and devoted wife Wendy. His two beautiful daughters Me’Chelle and Mikayla.One son Dorian. One grandson Cameron. Two brothers Robert, Gregory. Jr.(Dionna), two sisters Monique (Clifton Sr.), Kenya. Six nieces: Angel, Mariah, Angie, Amire , Mya and Ava. Three nephews Gregory III, Maleak, and Clifton Jr. Four aunts Martha, Cynthia, Wanda, Brenda. Two uncles Ruddy and Keith. Two goddaughters Domonique and Niyah. Four godsons Jaylen, Venard Jr, Joseph, and Anthony. His CDC family, El Shaddai Family and a host of cousins, close friends, and ministry colleagues. .

ANTONIO DELRAY MCDUFFY aka &#8220;Tony&#8221; was born July 10th 1969 in Detroit MI to Deborah Bishop and James Lindsey. He was the first born of five siblings. His father James passed away December 12, 1972. His mother met the love of her life... View Obituary & Service Information

The family of Antonio Delray McDuffy created this Life Tributes page to make it easy to share your memories.

Send flowers to the McDuffy family.