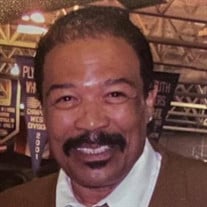 Anthony Glynn Turner, affectionally known as “Tony,” was born on October 1, 1956 in Detroit, Michigan to Roosevelt and Barbara Turner. As the oldest of the three siblings, he was one of the most photographed babies in the 1950s. Tony grew up in one of the first homes built on Ohio Street in Detroit, along with his siblings, Sandra Dianne (Sandy) and Gregory Alan (Greg). At that time, his house was one of few houses in the area—surrounded by grassy fields and dirt roads. His father cultivated a plentiful vegetable garden, several fruit trees and a grapevine in the backyard, and Tony was raised on the food grown by his parents. He inherited a love of jazz from his father, who encouraged his children to listen to jazz music in his home. His mother introduced him to God and helped him to develop an unconditional love of others. He played sports with his brother, Greg—lots of football and a little Homerun Derby. He and his brother, Gregory, bonded over their electric road racing set. Sandy was their audience, and every once in a while, was actually allowed to race cars with her brothers. Tony loved to work—starting with his first job as a clerk at the corner store when he was 14 years old. During high school, he worked as a clerk at the Great Scott grocery store, and as a lifeguard for the Johnson Community Center. After high school, he attended Local 547 Engineering School, and obtained his Engineering License from the City of Detroit. He worked as a boiler operator for Detroit Board of Education until he retired after 25 years of service. Tony was one of the first people to sell Amway, which was a major factor in developing his healthy living lifestyle. Tony was a good listener, and accepted people as they are. He put these skills to use as a mentor for Narcotics Anonymous Fellowship (NA Fellowship), of which he was a member for 22 years. The NA Fellowship became Tony’s beloved second family, providing support and a means for him to give back to his community. He is affectionally remembered by one of his mentees, William Calimese, who wrote to Tony’s sister, Sandy: “I

Anthony Glynn Turner, affectionally known as &#8220;Tony,&#8221; was born on October 1, 1956 in Detroit, Michigan to Roosevelt and Barbara Turner. As the oldest of the three siblings, he was one of the most photographed babies in the 1950s.... View Obituary & Service Information

The family of Anthony Glynn Turner created this Life Tributes page to make it easy to share your memories.