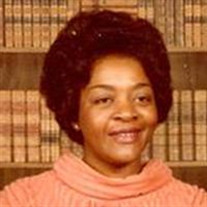 Annie P. (Harris) Osborne went home on February 3, 2016 under the care of the Allegiance hospice home in Jackson, Michigan. Annie was born on April 1, 1940 in Osceola, Arkansas. She was preceded in death by her parents and eldest sister Carlee... View Obituary & Service Information

The family of Annie Pearl Osborne created this Life Tributes page to make it easy to share your memories.

Send flowers to the Osborne family.