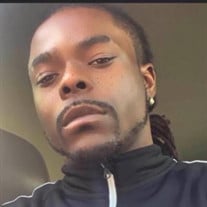 Andre’ Darrell-Levan Oliver was born on October 15, 1992 in Jackson, Michigan to Arlene Robinson and Darrell Oliver. Andre’ was a loving son, father, brother and grandson. He gained his heavenly wings on Tuesday, July 27, 2021, at the age of 28. Andre’ was preceded in death by his grandparents, Herman and Liza Robinson and Elward Oliver. Andre’ was an awesome father, son, brother, uncle, grandson, cousin and friend that did many things in life to make his family proud. Andre’ joined Second Missionary Baptist Church at an early age. He was a graduate of the Jackson Public Schools System. He was employed at Gestamp in Chelsea, Michigan as an associate machinist. He was well known in the community for not only his unforgettable personality but also for that bright (light up the whole room) smile he often shared with everyone. Andre’ was a great father to his children, making many sacrifices so that his children would be cared for in a loving environment. Let’s not forget his love for his animals, Scrappy, King and Tank as well as his great love for playing basketball and the online 2K basketball video game. He was a young man that you could not help but love. Andre’ is survived by his loving parents; Arlene Robinson and Darrell Oliver, his six children; Lamarianah Oliver, Na’Ziyah Oliver, Zah’Kiah Oliver, Ah’Niyah Oliver, Andre’ Oliver, Jr. and A’Drian Oliver and stepson; Christopher Jones, his siblings; Darrell Robinson, Maurice (Keishana) Robinson, Kassandra Oliver, Jeanel Oliver, Darren (Alisha) Oliver, Connie Oliver and Kiara Oliver, his grandmother; Marie Oliver, his great uncles; John Willis, George Bird, Wendell Oliver, James Oliver, James Bradley and Sammy McPherson, his great aunts; Camie Robinson, Wilamina Bird, Janet Nichols, Carrie McPherson, Alberta Oliver, Hattie Oliver, Lubertha Oliver and Ella Jean Oliver, his uncles; Bobby Thompkins, Ricky Oliver, and Earl Oliver, his aunts; Evelyn Carter, Deana Oliver, Cheryl Oliver, Katrina Oliver and Monica Oliver. Special acknowledgements to; Zonie Thompkins, Vanessa Williams and Edna Morris and a host of nieces, nephews, cousins, other loved ones and friends.

The family of Andre' Darrell-Levan Oliver created this Life Tributes page to make it easy to share your memories.

Send flowers to the Oliver family.