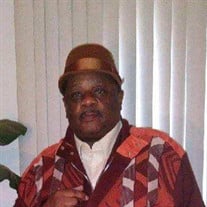 Alvin Knight was born June 28, 1954 in Detroit, Michigan. Born to his biological parents; Robert Lee Knight and Dorothy Lee Knight. He was preceded in death by his adored foster parents; Samuel Brantley and Lydia Brantley and later by parents; Robert Lee Knight and Dorothy Lee Knight. Alvin (Al) was a very industrious self-made man; organized and focused in all his endeavors. He would be considered one of God’s angels carrying out the commandment of, “Loving thy neighbor as thy self.” He was always there to help anyone who was in need friend or foe. His infectious smile showed the warmth of who he was. Alvin accepted Christ at an early age at Lomax Temple Church. He attended the Detroit Public School system. Furthering his education, he entered Job Corp where he gained his certification as a Carpenter. He then continued his career with various real estate companies; Kirk Tessler, Century 21, Rondo’s and Trust. He later started his own business; Al’s Home Improvement and Al’s N House Sitters. Al was very kind hearted and passionate about helping people. He loved his family and enjoyed; playing pool, sitting by the water, cracking jokes, eating fried chicken, playing tennis, fishing, barbecuing, listening to jazz, attending festivals, concerts and watching sports with family and friends. Al’s passion was rehabbing homes, where he gained his name as Carpenter Al. He touched many lives and was loved and respected by everyone who knew him. He was considered a role model. On Monday, January 11, 2021 Alvin Knight received his wings at Beaumont Hospital in Grosse Pointe, Michigan. Preceding him in death were (1) brother and (6) sisters. Al leaves to cherish is memory his loving children; Kenyarie (Carlos) and Akia, two grandchildren; Ania and Na’Zayrah, his stepmother; Mary Knight, and Dora Hanna; his living siblings; Melvirtha (Larry), Velma, Elnora, Delora (Council), Carolyn (Mike), Mary, Lamar, Rufus (Cetiana), James, Michael, Bobbie, a host of nieces, nephews and friends and special friend; Rochelle and daughter Mariah (Sugar Dumpling).

Alvin Knight was born June 28, 1954 in Detroit, Michigan. Born to his biological parents; Robert Lee Knight and Dorothy Lee Knight. He was preceded in death by his adored foster parents; Samuel Brantley and Lydia Brantley and later by parents;... View Obituary & Service Information

The family of Alvin Knight created this Life Tributes page to make it easy to share your memories.

Send flowers to the Knight family.