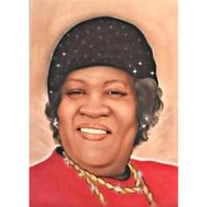 Altrue "lady" Maddox was born September 14, 1923 to the late John Guss and Odessa Hall. Altrue had one sister, Johnny Mae Folks who preceded her in death. Altrue graduated from River Rouge School District in 1940 and later extended her education at Lewis College of Business of Detroit, Michigan, studying bookkeeping and accounting. Upon graduation, Altrue was employed by the U.S. Army Tank Automotive Command in Warren, Michigan for twenty two years. After retiring from ATAC, Altrue returned to work lending her expertise in bookkeeping and accounting to the Detroit Rescue Mission for over ten years. Altrue married at an early age to John Preston Maddox who preceded her in death, and to this union six children were born; one of which preceded her in death. In 1962 Rev. John Maddox was called to pastor Second Baptist Church of Romulus in Romulus, Michigan where Altrue served as First Lady for eighteen years. They later returned to their home church at Union Second Baptist and remained faithful to their respective callings. Altrue was a member of Union Second Baptist Church until her transition. Altrue was a great cook and loved being around her family. Family was most important to her. In fact, Altrue was one of the pioneers that started the Maddox­ Folks Thanksgiving Day Dinner which has lasted as a family tradition for the past fifty years and has become a major gathering for family and friends. Altrue participated in numerous civic and church activities, such as, The Detroit Rescue Mission's Clothes Drive, collecting donations for needy families, and providing meals to the hungry on a regular basis, The Women's Auxiliary of Calvary District, The National Baptist Convention, and Church Women United. Altrue also served as Mission President at Union Second Baptist Church where she shared her calling as a missionary with others. Altrue Maddox, who was affectionately called "lady" by family and friends that loved her dearly was blessed beyond measure and sought to bless others throughout her entire life. On December 2, 2015, Altrue Maddox departed this life, she leaves to cherish her memory five children; Laverne (Willie) Young, Gerald (Elaine) Maddox, Irma "Cake lady" Miller, Nona Hooks, and Dr. Michael (Sandra) Maddox, fifteen grandchildren, twenty seven great-grandchildren, and a host of nieces, nephews, cousins, church family and friends.

Altrue "lady" Maddox was born September 14, 1923 to the late John Guss and Odessa Hall. Altrue had one sister, Johnny Mae Folks who preceded her in death. Altrue graduated from River Rouge School District in 1940 and later extended her education... View Obituary & Service Information

The family of Altrue Maddox created this Life Tributes page to make it easy to share your memories.

Send flowers to the Maddox family.