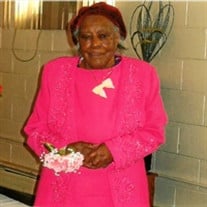 Alice Marie Vanderbilt was born February 26, 1926, to Ozella Foster Clark and Hubert Clark in Spartanburg, South Carolina. She was the third of seven children. Vernon, Herman, Otis, Viola, and Charles all preceded her in death. The family moved to Winston-Salem, North Carolina where Alice was educated in the public school system. After high school, she graduated from Winston-Salem Teachers College and moved to Detroit, Michigan. Alice accepted Jesus Christ as her personal Lord and Savior at a young age. After moving to Detroit, she joined with Vermont & Hancock Church of God under the pasturage of Rev. Raymond S. Jackson. In 1948, she met Henry Vanderbilt, Sr. and they were united in holy matrimony October 1953. To this union, seven children were born. She loved family car trips for summer vacations and cooking her delicious holiday meals. In 1969, Alice obtained her Masters of Early Childhood Education degree from Wayne State University. She was a Head Start teacher for the Catholic Archdiocese of Detroit for over ten years. She also worked for the Detroit and Hamtramck Public School systems, Comerica Park (Tigers Baseball), and the Detroit Election Commission. However, what she loved was teaching Sunday School. The family moved their membership from Wisconsin Avenue Church of God to Joseph Campau Avenue Church of God in the late 1960’s. Sister Vanderbilt was actively involved in the Adult Choir, Sunday School and Outreach departments. She was known for calling her students to remind their parents to bring them to church. Along with her husband Henry, Sister Vanderbilt was faithful in visiting the sick and shut-in, ministering at nursing homes and hospitals, and giving generously of her time and finances. A quiet spirit, she was never loud or boisterous or moved by the latest fashion; but chose to let her actions do the talking. When Dr. Charles H. Wright established the Museum of African American History, Alice was very supportive; Besides him being the doctor who delivered all of her children, she believed deeply that we as a people should never forget our history. Sis. Vanderbilt was affectionately called “Mother of the Church” being the oldest living woman at Joseph Campau for several years. After declining health would not allow her to attend church regularly, she loved receiving and reading the many letters, get well, birthday and other greeting cards which she proudly displayed all around her house. She even plastered the walls with pictures of “her president” Barack Obama. Alice’s favorite pastime was sitting on her front porch in her green chair during the warm summer months. Early Sunday morning, November 19, 2017, Mother Vanderbilt was called to her eternal home. She leaves to cherish her memory, one sister; Lillie Mae Johnson of Charlotte, North Carolina, seven children; Henry, Jr., Myron (Leslie), Kathy, Casey, Tracy, Sylvia, and Pamela, two daughters-in-law; Deanna and Veronica Vanderbilt, one sister-in-law; Sharon Clark of Winston-Salem, North Carolina, twelve grandchildren; Anaka, (LaPaula), Stacie, Charissa (Harlan), Natalie (Ebony), Quincy (Tecia), Drew (Monica), Lydia, Taylor, Julia, Channing, Kyndrea, and Kyle, twelve great-grandchildren and a host of nieces, nephews, cousins, other relatives, god children, friends, and church family. Special thanks to her friend Mrs. Josephine Staffney and others who always called to say hello and cheer her up.

Alice Marie Vanderbilt was born February 26, 1926, to Ozella Foster Clark and Hubert Clark in Spartanburg, South Carolina. She was the third of seven children. Vernon, Herman, Otis, Viola, and Charles all preceded her in death. The family moved... View Obituary & Service Information

The family of Alice Marie Vanderbilt created this Life Tributes page to make it easy to share your memories.

Send flowers to the Vanderbilt family.