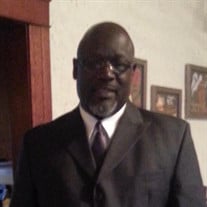 Alfred Jones was born at Independence Hospital in Independence, Louisiana, September 12, 1955 to Albert and Ellarena (Hills) Jones. Alfred graduated from Benton Harbor High School in June 1973. He continued his education at Central State University, Mt. Pleasant Michigan. He received his Masters from Spring Arbor University Jackson, Michigan. Alfred was a Mason at the lodge in Muskegon Michigan while employed at the Brooks Correctional Facility at a Recreational Director. He was employed by the State of Michigan for 37 years before he retired in 2018. Alfred was known for his travel through the state as an Administrative Assistant where he resolved issues within the prison throughout the northern area of the state. Alfred loved meeting new people as he loved to talk, play games like chess and tell his family about the direction of life they should go. He will be dearly missed by all who knew him. Most of all he was a wonderful brother, dad, uncle, friend and etc. God has selected a Jewel for his kingdom. He leaves to cherish his memories his son; Alfred Jones, Jr., sisters; Cathy (James) Yates, Audrey Yates, Rosemary Holloway, Cynthia Jones and Kathy Jones of Benton Harbor, Michigan, two brothers; Albert Jones, Jr. of Benton Harbor, Michigan and Ronnie Jones of Indianapolis, Indiana, adopted brother; and sister Stanley Collin and Tina Cyprian, a special friend; Lee Ann Robinson of Jackson, Michigan who shared many years of companionship with him, one daughter; Nikki Robinson, two granddaughter’s; Eden Rose Jones and NaRyia Robinson and his dog Ivory.

The family of Alfred Jones created this Life Tributes page to make it easy to share your memories.

Send flowers to the Jones family.