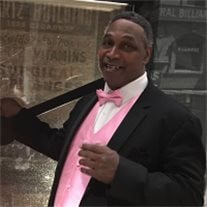 Abdul Gofur Ali was born on January 29th, 1958 to the very loving Mohammed and Virginia Ali, whom both preceded him in death. Born and raised in Detroit, Michigan he attended and later graduated from the Detroit Public Schools. He accepted Christ at an early age in his life and was a member of Renaissance Unity. Abdul who worked for the Detroit Public Schools after graduating, and was later employed by the City of Detroit Police Department. He served as a Detention Officer for over 20 years before his retirement in 2012. Abdul known to friends and family as Dewey was a true definition of a humanitarian. There was no one in need that he would not help when called upon. He was a devoted, kind-hearted and compassionate person to everyone, especially children, who held an extra special place in his heart going as far as to make sure to gather all his nephews and nieces on his birthday to celebrate with them, and this would continue when he had a family of his own. He was an avid bowler, golfed, and enjoyed reading, music, musicals and anything pertaining to history. Abdul had one biological son, but many will say he was like a dad to them as well. On June 27th, 2019, Abdul stepped out of time and into eternity, he leaves to mourn his passing and cherish his memory, his wife; Sharon, his children; Kahlil, Marlin, Ne’Quita, Autumn(Hassan), Keith Walker(son of Deborah Leonard), and foster son; Henry, his brothers; Eron (Lorraine), Talile (Claire)  Umor, and Muktsar (Veda), his sisters; Jathia Albert (Donald), and Audrey Shiotsu  (Norihisa), sister-n-law; Carrie Coleman(Tracey), four grandchildren; Amena, Leilani, Kayus, and Buddha,also Aunt Viola, and a host of nieces , nephews, family and friends, and a very close friend Terrence Childress.

Abdul Gofur Ali was born on January 29th, 1958 to the very loving Mohammed and Virginia Ali, whom both preceded him in death. Born and raised in Detroit, Michigan he attended and later graduated from the Detroit Public Schools. He accepted Christ... View Obituary & Service Information

The family of Abdul Gofur Ali created this Life Tributes page to make it easy to share your memories.

Send flowers to the Gofur family.